In Huntington in the 1940’s, people had been moving in increasing numbers from the central part of the city to the southeastern part of town. The Roman Catholic Diocese of Wheeling was aware of this population trend and, in 1950, Archbishop John J. Swint purchased a two-and-three quarter acre tract of land on Norway Avenue, in the city’s rapidly growing southeastern section.

In the spring of 1951, a temporary gray-metal church building and a permanent red brick rectory were begun. Footers for the buildings were poured on June 14, 1951. 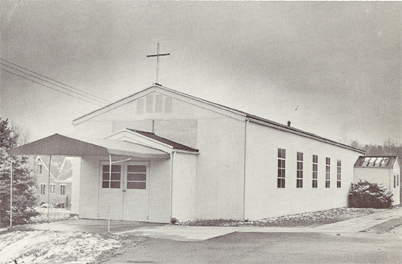 For the temporary church, “a prefabricated metal building was purchased from Armco (a steel company in Ashland, KY) and erected by them,” states parish historical material. The records add that “a local builder, Harry Shamblin, and his company finished the interior.” The architectural firm of Vecellio and Kreps of Charleston “drew up plans for the rectory and the construction contract was awarded to E.P. Leach and Sons, Huntington contractors,” states the historical data. The church building and rectory were begun shortly after the footers were poured, and “by the end of November, both buildings were practically completed,” states parish history.

Mr. James E. Leach recalled that at the same time that his company was building the rectory, the temporary church was being assembled on the job site and, later the interior done by the Shamblin Company. Mr. Leach stated that Father Tierney obtained the original pews from a church in Wheeling and the Stations of the Cross came from his previous parish church. Some of the original pews can now be found in the choir loft in the church. 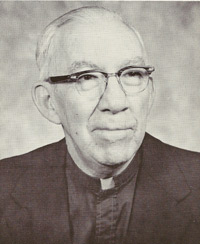 The new parish, placed under the patronage of Our Lady of Fatima, was officially established on Oct. 22, 1951. Formed from the mother parish of St. Joseph’s at 6th Ave. and 13th St., Our Lady of Fatima included most of the southeast section of Huntington and adjacent parts of Cabell County.

The first Masses were celebrated on December 2, 1951, the first Sunday of Advent, in the temporary church on Norway Ave. at the intersection of Avondale Rd. At that time, some 200 Catholic families lived within the boundaries of the new parish. 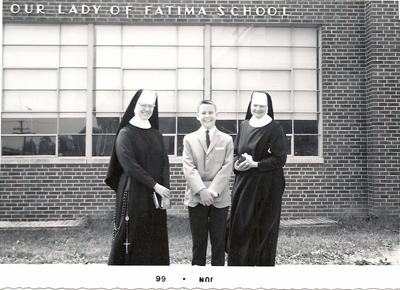 Our Lady of Fatima School

In 1952, steps were taken to provide a grade school for the children of the parish. Building plans were approved on March 15, 1953, and the contract was awarded to E. P. Leach & Sons in August; groundbreaking took place on September 4, 1953. The new school was dedicated on Sunday, September 5, 1954, and opened on September 7th with six grades and 90 pupils. The school was placed under the direction of the Pallottine Missionary Sisters whose motherhouse was located in Huntington at that time. By September of 1955, the 7th and 8th grades were added, increasing the enrollment to 140 students.

By 1960 the number of Our Lady of Fatima parishioners had doubled. The temporary church building was outgrown and more land was needed. Four additional lots, fronting some 175 feet to the east along Norway Avenue, were purchased. The architectural firm of Vecillio and Kreps, Charleston, WV, was commissioned to begin plans for a new church building. 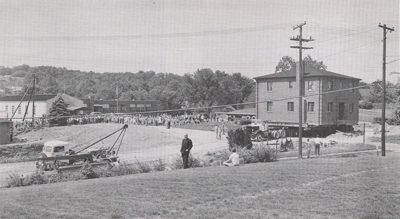 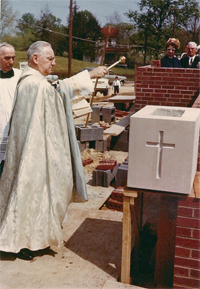 In August 1962, Archbishop Swint signed the construction contract awarded to E. P. Leach & Sons. The building was staked out on October 1, 1962. On Sunday, April 28, 1963 after the rectory building had been moved some 150 ft to its present location, the Rev. George Burke, pastor of the mother church, Saint Joseph, Dean of the Huntington deanery, and delegate of His Excellency Bishop Hodges, blessed and laid the cornerstone of the new church. Very appropriately, the first Mass in the completed building was celebrated by the pastor, Father James F. Tierney, on Thanksgiving Day, November 28, 1963. The church was filled with what was propably the largest congregation ever to attend a Mass indoors in the City of Huntington. 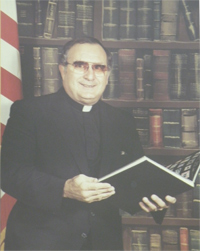 On May 9, 1975, our pastor for 24 years, Fr. Tierney was appointed pastor of St. Anthony’s parish in Fairmont, WV. On that same day the Rev. Cesidio J. Federico, formerly pastor of Blessed Trinity parish, Wheeling, WV, was appointed pastor of Our Lady of Fatima parish. In its 29 years of existence, our parish had grown from 120 families to approximately 700 families.

All the funds that were required to build these facilities were raised by parishioners, without professional help, and were paid off by 1977. Further expansion and modernization of the existing buildings was now planned and undertaken. In 1974, and again in 1977, the parishioners made a substantial pledge toward a building and maintenance fund. Out of this strong base of funds, the church sanctuary was completed, some long-needed improvements were made in the rectory, and a three-phase plant expansion program was begun. In 1978, the school was modernized and greatly expanded by the addition of classrooms, a kindergarten and a library. Phases II and III of the program included a gymnasium and a parish hall.

By 1984, the beautiful gymnasium with its accompanying office, storage, shower and bath rooms was completed and dedicated. By January 1988, phase III, the dream of a large and functional parish hall, had become a reality and its dedication was celebrated with a wonderful party for the parishioners whose time, treasure, and talent had produced it.

In June of that year, our pastor of over 14 years, Rev. Cesidio J. Federico, was appointed pastor of St. Michael Church in Vienna, WV. On July 22, 1988, Rev. John C. McGinnity became our third pastor in 37 years, assuming at the same time the appointment as Dean of the Huntington deanery. 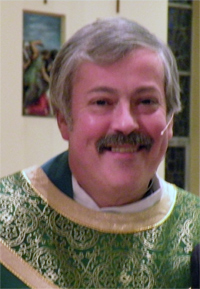 In June, 2004, Rev. James M. Sobus, was appointed our pastor. He was formerly pastor of St. Michael in Wheeling, WV. Under the direction of Fr. Sobus, the parish turned our attention to the needs of those in the surrounding communities. The parish took on a prayerful and active support of the Right to Life of all persons. Additionally, we “adopted” the ECCHO food pantry in Milton, WV, as a special need. Food and monetary drives were held throughout the year with special programs at Thanksgiving and Christmas.

In June, 2013, Rev. Paul Yuenger was appointed pastor of Our Lady of Fatima. He was formerly pastor of Sts. Peter & Paul parish in Oak Hill, WV. Fr. Yuenger took on the repair and modernization of our parish campus.  He relocated the rectory offices to a home owned by the parish on Green Oak Dr. The former rectory was completely remodeled and then converted into Parish Offices along with meeting rooms. The Parish database system was switched to ParishSoft and the parish worked with the Diocese to stabilize the Parish School. The signage in front of the church was redesigned and the children of Fatima were added to the statuary. 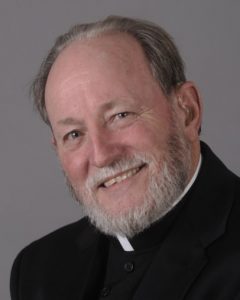 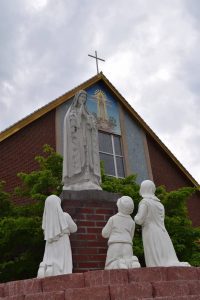 Later the Diocese purchased a home at 521 Norway Ave. and Fr. Paul moved the Parish Rectory there after extensive repairs and remodeling. He also oversaw the remodeling of the Parish Hall and Parish Hall kitchen. He was active in the establishment of the Knights of Columbus at the parish in 2018. He with the aid of the KOC took over responsibility for the Catholic Cemetery located in the Guyandotte area of Huntington.The parking lots were resurfaced and a new lot was added on the corner of Jackson St. Fr. Paul steered the Parish through the lockdowns of 2020 – 2021 due to the Covid-19 pandemic. He retired in July 2021 and settled in Huntington. 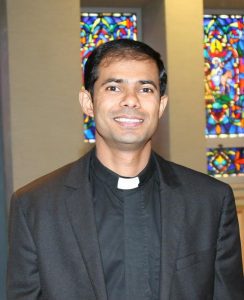 In June of 2021, the Bishop announced that in consultation with Very Rev. Joseph Thottankara, M.C.B.S., provincial superior of the Missionary Congregation of the Blessed Sacrament, Zion Province in Kerala, India, Father Tijo George, M.C.B.S., was appointed pastor of Our Lady of Fatima Parish in Huntington and St. Stephen Parish in Ona with residence at the parish rectory in Huntington, effective July 14, 2021. Fr. Tijo George was formerly pastor at St. Anthony’s in Charleston and Our Lady of the Hills Parish in Elkview.

Today, our parish serves over 600 families and over 1,200 parishioners.